Do you read Calvin & Hobbes? The other day in one of the comic strips, Calvin says, “There’s no problem so awful, that you can’t add some guilt to it and make it even worse.” So true! Guilt is such a common emotion…this is the one that is our true 3 am friend…that keeps us up in the night …with regret, remorse and self –disgust for company.

We are all familiar with this emotion – guilt. We do something bad. We feel terrible. And the feeling just won’t go away….it eats us away from inside…it makes us feel like a bad person.

And though all personal growth teachers & coaches tell you that you need to “let go” of that guilt, the biggest question is how. Because we have never been taught to deal with it.

Growing up is filled with guilt… for not being good enough, for dissing our parents, for having survivor’s guilt, for having gossiped, smoked , for being abused, whatever…then as we grow up we add more: we now have bad spouse guilt, bad parent guilt, bad kid guilt, bad friend guilt, Catholic guilt and Jewish guilt…and don’t forget no-exercise guilt, the over-spending guilt, the breaking the diet guilt…you can add your own here!

Now guilt has a few benefits: research has shown that people who feel guilty are less likely to be psychopaths J . Obviously, by the very fact that you feel guilt means you feel empathy, you are loving, considerate person, right? It makes you a better friend, lover and employee.

But the downsides of guilt are far far more.

While some amount of guilt is actually good to keep our behavior in check, excessive guilt leads to feelings of low self-worth, low self esteem and clinical depression.

In his book Feeling Good: The New Mood Therapy, Dr David Burns, Professor of Psychiatry, Stanford University,asks a relevant question-I am paraphrasing what he said: Every rule-break has a limit on
punishment right? So what would be your time-limit for whatever you think you did wrong? And will you stop punishing yourself after that?

You see, guilt is often irrational…and if you are the kind who is always feeling guilty and beating yourself up, maybe these tips could help you.

#1. Look for the evidence

If you feel guilty because you’re not doing enough for your kids, partner, or family, list all the things that you regularly do for them. Then keep the list in your purse or wallet to pull out when guilt rears its head!

#2. Appreciate what you do

Guilt and perfectionism have a negative bias. They make you pay attention to what you’re not doing right. So every day write down three things that you actually did…this will force your to focus on your accomplishments

#3. Be direct and get more information

A discussion in the family led to my daughter and niece saying that only if parents clearly explained why they were doing what they were doing, probably the kids wouldn’t feel so resentful.A very valid point! We often see kids as kids and with no understanding of reasoning. Maybe you could ask the people you think you’re neglecting whether they actually feel neglected. Consider whether they have a tendency to expect too much and not take enough responsibility for themselves (for instance, teenagers who expect you to pick up after them). Then think about how an outside observer would view the situation. If you figure out that you really aren’t doing enough, then come up with some solutions or compromises that balance everybody’s needs.

#4. Think how you would you see things if the roles were reversed

Would you think your friend or partner wasn’t doing enough given all they had going on? We find it easy to be compassionate and understanding with others but are too harsh on ourselves. By deliberately taking a third person view of the situation you will get a better perspective.

#5. Look for the emotions underneath the guilt

If you’re in a relationship with a very needy person or a narcissist, your partner may convince you that you’re being selfish by setting limits and saying no. Over time, your guilt and inner conflict may actually be masking resentment.

Accept you’re not a bad person. But you did something bad. And forgiveness though the hardest, is one of the things that will move you through guilt. A lot of people think they’d feel less guilty if they had more self-esteem. Wrong. You don’t need more self-esteem. You need more self-compassion.You’re human. You’ll screw up. Denying that is crazy. Forgiving yourself has all the benefits of self-esteem without making you a narcissist that’s out of touch with reality. Unconditional self-acceptance is a great start and self-compassion is a great chaser. It increases your self-worth.
Ask yourself, “What can I learn from this?”
Forgive yourself. Repair the damage. And move on.

There is one way which is the most effective when you are wracked by guilt of what you did to another: APOLOGISE. That’s right.

Now if none of these things work, here’s the final tip. Get Older! That’s right….this is the simplest solution. As you grow older, guilt, shame, embarrassment is felt less frequently!

So if all else fails, just wait. Turns out that the travel agent in charge of your guilt trips will eventually retire:)

Guilt helps you achieve zilch…other people are not going to love you more, because you have guilt. You are not going to become more productive because you feel guilt. You will not stop adding more things to feel guilty about. Accept it. You are human. Screwing up comes with the territory.You’re not a bad person. But you sometimes do bad things. You know what that makes you?

If you found this blog useful, share it with your friends , family and co-workers….guilt helps no one…let’s banish it forever.
And if you need more help in releasing this stranglehold of guilt, reach out to me. Call my office on +91 6281 257912 & book an appointment. Or here: www.lumiere24.com/make-an-appointment. Write. Leave a comment in the box below. Whatever. But. Take. Action. TODAY. 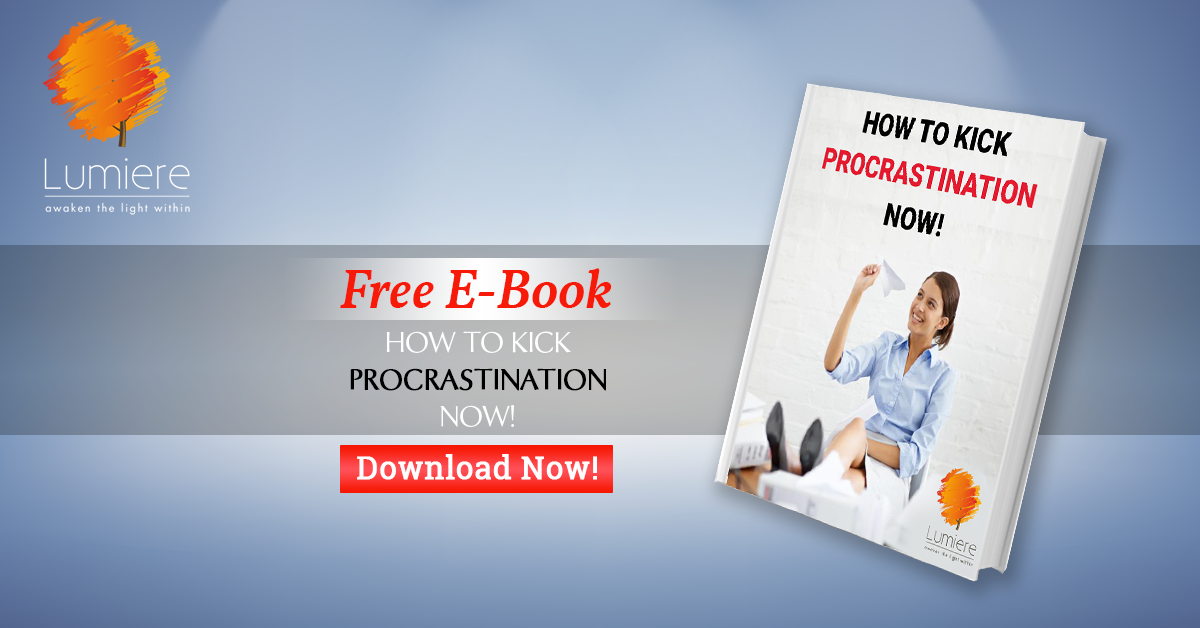 So Close! Fill in your details to download the eBook